CRESTWOOD, KY. and WALTHAM, MA., April 16, 2018 (GLOBE NEWSWIRE) — Apellis Pharmaceuticals, Inc. (Nasdaq:APLS), a clinical-stage biopharmaceutical company focused on the development of novel therapeutic compounds for the treatment of autoimmune and inflammatory diseases, today announced interim data from its Phase 1b PADDOCK trial for patients with paroxysmal nocturnal hemoglobinuria (PNH). The ongoing trial is evaluating the treatment with APL-2, a novel inhibitor of complement factor C3, in patients not previously treated with eculizumab (SolirisTM).

The Company previously reported that APL-2 reduced lactate dehydrogenase (LDH) and increased hemoglobin (Hgb) levels in three patients not previously treated with eculizumab after daily subcutaneous administration of 270 mg of APL-2 for 28 days in the trial. Based on the safety and activity observed in these patients, the administration period was extended from 28 days to one year and the number of patients to be enrolled in the PADDOCK trial was increased. As of April 13, 2018, the data cut-off date for this interim analysis, six more patients have been treated with APL-2 at the 270 mg/day dose for a minimum of 28 days. The data being announced today excludes results from one of the original three patients, who had underlying metastatic ovarian cancer with a chronic low gastrointestinal bleed, unknown at the time of screening, which resulted in artificially low Hgb and high LDH levels that were determined to be unrelated to PNH, and also excludes results from the initial cohort of two patients treated with APL-2 at a dose of 180 mg/day. 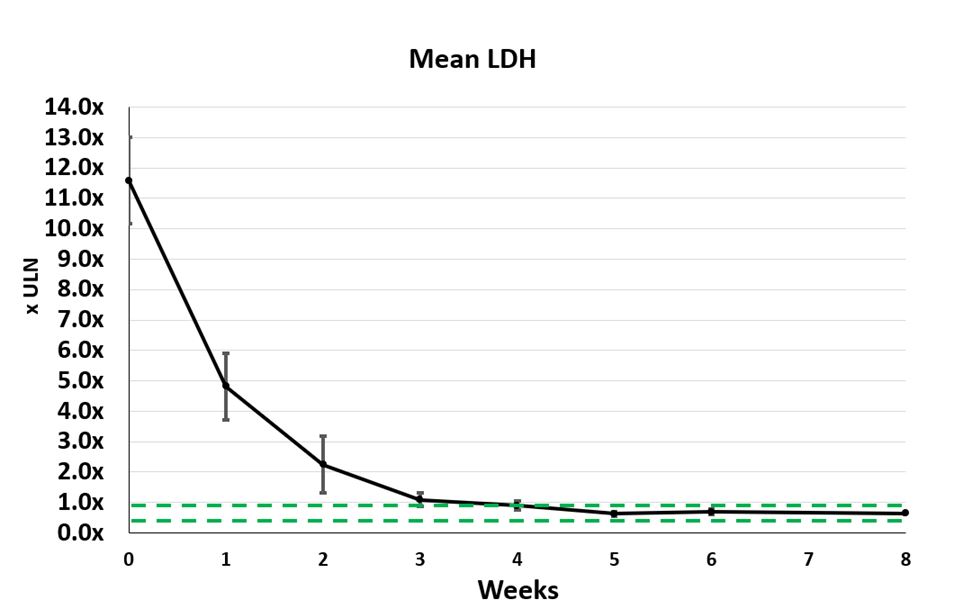 The same eight patients had an average increase in hemoglobin of 4.3 g/dL, from a baseline average of 7.9 g/dL to an average last measurement of 12.2 g/dL (range 11.9-12.9 g/dL) within the first 12 weeks of the treatment period (12 g/dL = lower limit of normal for Hgb). Except for two patients each of whom received a single transfusion within the first two weeks of treatment, no other transfusions have been reported in this study for any patients during the treatment period with APL-2. The table below and included figure show the measurement of hemoglobin levels for each of these eight patients to date over their respective treatment periods (up to 12 weeks). 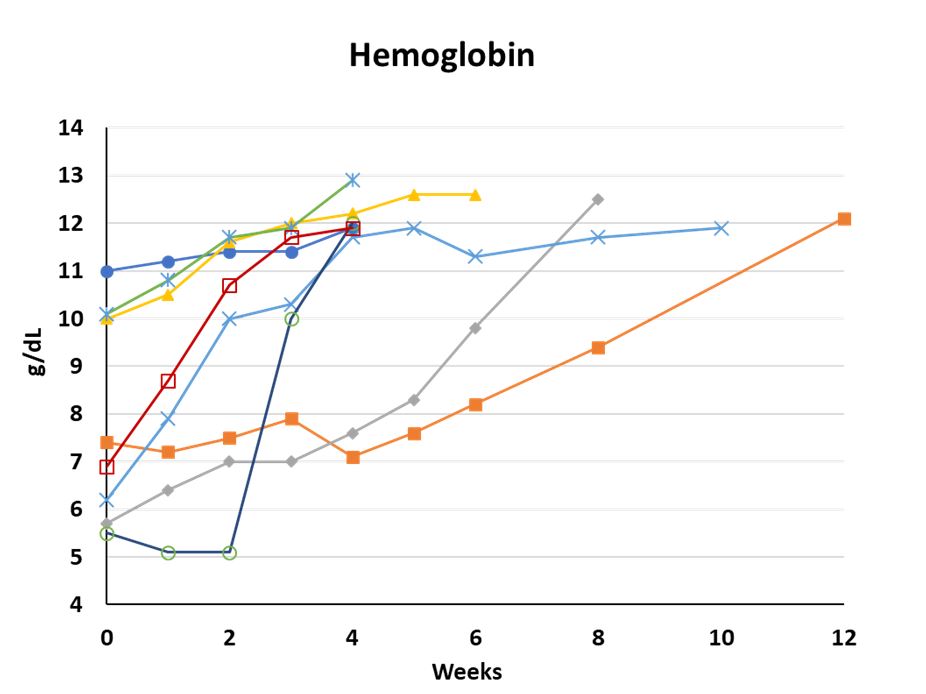 “While the LDH corrections seen with APL-2 monotherapy in these patients with PNH are exciting, it is the significant hemoglobin correction that is most clinically meaningful,” said Peter Hillmen, Professor of Experimental Hematology at the Leeds Institute of Cancer & Pathology. “LDH is a good measure of intravascular hemolysis but neither LDH nor transfusion avoidance captures the ongoing anemia resulting from extravascular hemolysis seen in patients with PNH on treatment with eculizumab and other C5 inhibitors.”

Substantial improvements in other biomarkers of anemia were observed. The same eight patients had an average reduction in absolute reticulocyte count of 50% from 195 10^9/L to 97 10^9/L (normal = 30-100 10^9/L) over 28 days. Bilirubin in these patients was reduced from an average baseline of 42 umol/L to an average of 11 umol/L at day 28 (normal = 3-15 umol/L), an average decrease of 74%. The table below and included figure show the decreases in average reticulocyte count and average bilirubin level in the first 8 weeks of treatment.

“The overall hematological improvement with APL-2 in these patients with PNH is very encouraging and suggests a promising approach for management of PNH patients in the future,” noted Anita Hill, Lead Consultant for the National PNH Service at the Leeds Teaching Hospitals, U.K. “Elevated reticulocytes and elevated bilirubin are important markers of anemia resulting from extravascular hemolysis and are not known to improve in patients treated with eculizumab or other C5 inhibitors.”

To date, APL-2 has generally been well-tolerated in these patients. APL-2 has been administered systemically in the Company’s PNH clinical trials with more than 3,800 subcutaneous doses of 270 mg/day or more, representing cumulative systemic exposure of over 525 patient weeks of treatment on APL-2. No significant infections or thromboembolic events have been observed.

“We are extremely pleased with these early results from the PADDOCK study,” said Dr. Cedric Francois, MD, PhD, Founder and Chief Executive Officer of Apellis. “We believe that the results demonstrating broad hematological correction in these patients suggest that APL-2 monotherapy has the potential to be a superior treatment option for patients with PNH. These interim results are a step forward in our mission to improve the lives of patients suffering from unmet needs in complement mediated conditions. We look forward to reporting further updates to the ongoing PADDOCK trial in June.”

In the second half of 2018, the Company plans to initiate a Phase 3 clinical trial in approximately 70 patients with PNH comparing treatment with APL-2 monotherapy to treatment with eculizumab. Discussions are ongoing with the FDA, the European Medicines Agency (EMA), and the Japanese Pharmaceuticals and Medical Devices Agency (PMDA) regarding details of the clinical data that will be required to support regulatory approval of APL-2 monotherapy as a first-line treatment for PNH.

About the PADDOCK trial

PADDOCK is an open-label Phase 1b safety and efficacy study of 270mg of APL-2 administered daily by subcutaneous injection to PNH patients who have never received eculizumab. The PADDOCK study was initiated in December 2015 and is being conducted at multiple clinical sites outside of the United States. To date, two patients have been treated at 180 mg/day of APL-2 administered by subcutaneous injection and nine patients have been treated with 270 mg/day of APL-2 administered by subcutaneous injection for at least 28 days. The data being announced today excludes results from one of the nine patients treated with 270 mg/day of APL-2, who had underlying metastatic ovarian cancer with a chronic low gastrointestinal bleed, unknown at the time of screening, which resulted in artificially low Hgb and high LDH levels that were determined to be unrelated to PNH, and also excludes results from the initial cohort of two patients treated with APL-2 at a dose of 180 mg/day.

APL-2 is designed to inhibit the complement cascade centrally at C3 and may have the potential to treat a wide range of complement-mediated diseases more effectively than is possible with partial inhibitors of complement. APL-2 is a synthetic cyclic peptide conjugated to a polyethylene glycol (PEG) polymer that binds specifically to C3 and C3b, effectively blocking all three pathways of complement activation (classical, lectin, and alternative). In addition to the PADDOCK trial in PNH, Apellis is currently evaluating APL-2 in a second clinical trial for systemic administration in paroxysmal nocturnal hemoglobinuria (the PHAROAH trial). Previously reported interim data from this trial showed improvements in lactate dehydrogenase and hemoglobin levels in patients who are suboptimal responders to eculizumab. Apellis is also testing APL-2 for systemic administration in a Phase 2 clinical trial in autoimmune hemolytic anemia (AIHA) and a Phase 2 clinical trial in complement dependent nephropathies, as well as a Phase 1b/2 clinical trial evaluating intravitreal APL-2 in wet age-related macular degeneration. Phase 3 studies are planned in intravitreal APL-2 for geographic atrophy (GA) and PNH. Future clinical studies of APL-2 are anticipated in other diseases in which complement is implicated.

Paroxysmal nocturnal hemoglobinuria (PNH) is a rare, acquired, potentially life-threatening disease characterized by complement-mediated hemolysis with or without hemoglobinuria, an increased susceptibility to thrombotic episodes and/or some degree of bone marrow dysfunction. A significant subset of patients treated with the current standard of care still suffer from debilitating anemia and transfusion dependence.

Apellis Pharmaceuticals, Inc. is a clinical-stage biopharmaceutical company focused on the development of novel therapeutic compounds for the treatment of a broad range of life-threatening or debilitating autoimmune diseases based upon complement immunotherapy through the inhibition of the complement system at the level of C3. Apellis is the first company to advance chronic therapy with a C3 inhibitor into clinical trials. For additional information about Apellis and APL-2, please visit http://www.apellis.com.

Statements in this press release about future expectations, plans and prospects, as well as any other statements regarding matters that are not historical facts, may constitute “forward-looking statements” within the meaning of The Private Securities Litigation Reform Act of 1995. These statements include, but are not limited to, statements relating to the implications of preliminary clinical data. The words “anticipate,” “believe,” “continue,” “could,” “estimate,” “expect,” “intend,” “may,” “plan,” “potential,” “predict,” “project,” “should,” “target,” “will,” “would” and similar expressions are intended to identify forward-looking statements, although not all forward-looking statements contain these identifying words. Actual results may differ materially from those indicated by such forward-looking statements as a result of various important factors, including: whether preliminary or interim results from a clinical trial such as the results reported in this release will be predictive of the final results of the trial; whether results obtained in preclinical studies and clinical trials will be indicative of results that will be generated in future clinical trials; whether APL-2 will successfully advance through the clinical trial process on a timely basis, or at all; whether the results of such clinical trials will warrant regulatory submissions and whether APL-2 will receive approval from the United States Food and Drug Administration or equivalent foreign regulatory agencies for GA, PNH or any other indication; whether, if Apellis’ products receive approval, they will be successfully distributed and marketed; and other factors discussed in the “Risk Factors” section of Apellis’ Annual Report on Form 10-K filed with the Securities and Exchange Commission on March 19, 2018, and the risks described in other filings that Apellis may make with the Securities and Exchange Commission. Any forward-looking statements contained in this press release speak only as of the date hereof, and Apellis specifically disclaims any obligation to update any forward-looking statement, whether as a result of new information, future events or otherwise.